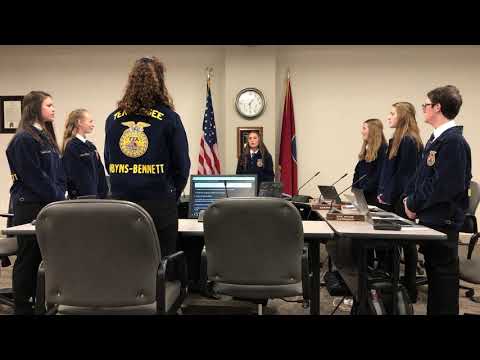 KINGSPORT — Kingsport City Schools officials recently recognized achievements of staff members and students, ranging from making ornaments for a Christmas tree at the White House to winning accolades from The Leader in Me program. And the board got a demonstration of how Future Farmers of America (FFA) members hold a meeting.

Folks from D-B EXCEL (DBE) presented a report to the Board of Education on Jan. 14 regarding their participation in the 2019 National Christmas Tree Display. DBE created one-of-a-kind ornaments representing Tennessee in the display, which was located on the ellipse in President's Park in Washington, D.C., during the holiday season.

“Both of my designs had the Great Smoky Mountains,” Amelia said of ornaments that showed fall and winter.

Designs included images such as Dolly Parton, vistas of the Smoky Mountains, the neon lights of Nashville, as well as other assorted images. The ornaments were on display on the Tennessee tree from Dec. 5, 2019, through Jan. 1. A group of D-B EXCEL students traveled to Washington to see the display and the national tree and state trees lit by President Donald Trump and first lady Melania Trump

D-B EXCEL was selected through a partnership between the National Park Service and the U.S. Department of Education. The students had about a month to submit the designs. All told, beside the main tree, 56 trees from all states, territories and districts of the United States were represented.

The FFA team is made up of D-B freshmen and competes at the district level. The opening ceremony highlights the purpose of FFA meetings, the duties of officers and the significance of recognition given to individuals. All FFA ceremonies are memorized, rehearsed and conducted with pride and dignity, according to information from the school system.

LIGHTHOUSE: LEADER IN ME

Board Vice President Eric Hyche recognized Johnson Elementary School Principal Stacy Edwards and members of the Johnson Lighthouse Team for being named a Leader in Me Lighthouse School by the Franklin Covey Co. It is the fourth Lighthouse designation in Tennessee and the first east of Murfreesboro. Of about 4,000 Leader in Me schools, about 300 are Lighthouse schools.

Since implementing The Leader in Me at Johnson, school officials said the program has impacted students, parents, staff and the community. School officials said the school has seen results over the past four years from implementing the process, such as strong growth in leadership, culture and academics. The two students who led the board Tuesday in the Pledge of Allegiance, Gabriel Morelock and Kamden Shoemaker, are among students active in the student leadership program.

Leader in Me is a whole-school transformation model, developed in partnership with educators, that empowers students with the leadership and life skills they need to thrive in the 21st century. It is based on principles and practices of personal, interpersonal and organizational effectiveness.

It integrates leadership, social-emotional learning, quality and educational models and processes including The 4 Imperatives of Great Leaders and The 4 Disciplines of Execution. The process includes student participation in goal setting, data tracking, leadership roles, Student-Led conferences, leadership environments, and Leadership Events. The 7 Habits of Highly Effective People is also a key component of the Leader in Me process.

Board member Todd Golden recognized KCS Assistant Procurement Manager Michelle Ramey for recently receiving the designation of Certified Professional Public Buyer. The certification is designated by the Universal Public Procurement Certification Council Board of Directors and includes a lengthy and rigorous application and examination requirement.