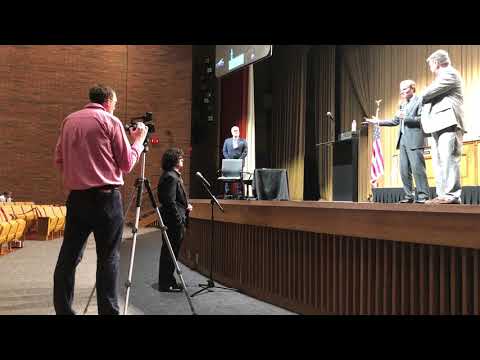 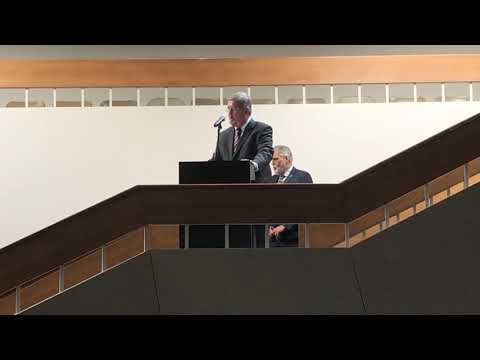 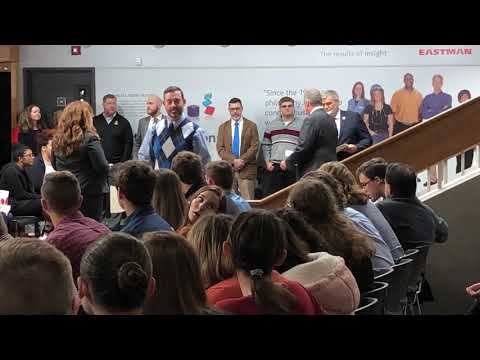 KINGSPORT — What could be better than a live court case, a chicken sandwich and a half-day out of the classroom if you are a civics student?

However, unlike most who view proceedings of the high court, the students from 12 schools got to quiz the attorneys involved and had a chance to talk with and have photos taken with Chief Justice Jeff Bivins. It was part of the more than 20-year-old SCALES (Supreme Court Advancing Legal Education for Students) program. In Tennessee to date, SCALES has allowed more than 36,000 students to see and hear a Supreme Court case live.

WHAT DID STUDENTS THINK?

“It was very fun and it was very interesting,” Science Hill senior Aaron Lemkin said. He asked the attorneys how they prepared and what two lawyers who did not speak during one of the cases did to assist their side. “I think it’s (a career in law) a possibility,” Lemkin said. “We’ll see.”

D-B sophomores Isaiah Bass and Jaden Payne, students in Advanced Placement government, said they also enjoyed the event. “I think we need that in a class. This is the real experience of the real world and how things work in the judicial system and government,” Bass said.

HOW DID IT WORK?

One group of students heard the first case, while the other heard the second. Both groups then joined to have a meal and to see the schools get certificates for participation in the program. Sullivan County Circuit Court Judge John McLellan III said Tuesday’s event marked the third time the program has been held in Kingsport, the other two being 1998 and 2005.

“We think this is a great opportunity to bring the courts and bring transparency to the justice system,” Bivins said. He, students, the justices and attorneys dined on Chick-Fil-A meals at Eastman Chemical Company’s Toy F. Reid Employee Center after the cases and a question and answer session.

Attorney Keith Grant said he learned the case would be heard in a venue with high school students in the audience after it was scheduled but was glad to participate. He said the students “ask better questions than some judges,” just not the Supreme Court judges.

Prior to the event, volunteer attorneys and judges visit the students’ classrooms to discuss the cases and process.

The first case heard was Joshua Keller v. Janice Castell et al over the firing of a firefighter from the city of Cleveland, raising the question of whether a personnel policy approved by a city government resolution should be treated as a contract, although Tennessee is an at-will employment state, and if that policy, since rescinded, was flawed.

The second was State of Tennessee v. Steve M. Jarman. The defendant is contesting a voluntary manslaughter conviction for killing his girlfriend because evidence against him included a past assault charge, of which he was acquitted.

One of the justices, Roger Page, likened City Manager Castell firing the firefighter and then considering an appeal of that decision to Sheriff Andy Taylor being both sheriff and justice of the peace on an episode of “The Andy Griffith Show.” However, the justices also quizzed the attorney for the other side, too.

The real issue, Bivins quipped, was if any of the students in the audience knew the Andy Griffith reference.

WHO WAS BEHIND THE SCENES?

“Hearing cases before the students of this great state is one of our most enjoyable experiences,” Bivins said. “It is a unique opportunity for the court to participate in civics education for Tennessee’s students. I am grateful to The Eastman Company, judges of the 1st and 2nd Judicial Districts, Julie Bennett of Bristol Motor Speedway, the local legal and business community and the educators whose hard work has made this event possible.”