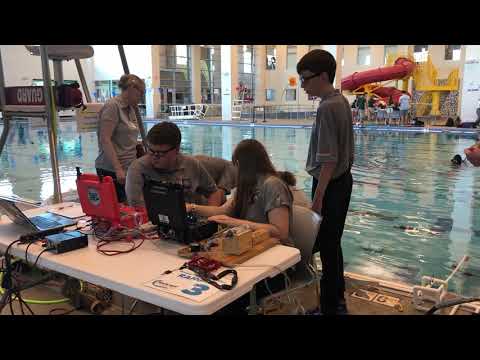 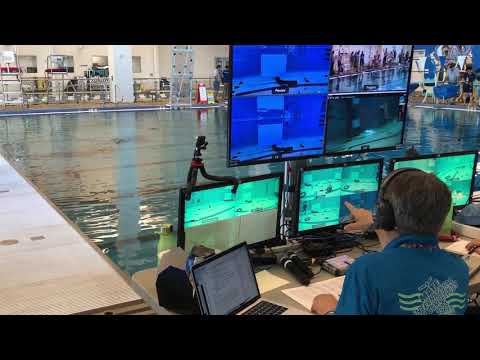 
Underwater robotics competition has 68 teams from across the world

KINGSPORT — A world underwater robotics competition that began Thursday will finish up Saturday in the Model City, where an estimated 1,500 people are gathered.

However, not everything went as planned, thanks to everything from mechanical breakdowns, national security issues and Mother Nature.

Students from across the globe converged on the Kingsport Aquatic Center for the 18th annual Marine Advanced Technology Education International ROV Competition, which is being hosted in the Model City for the first time.

D-B EXCEL’s R-Mateys ran into trouble when the claw on their robot ceased to work Friday afternoon, although team CEO Gavin Bentley said he believed the team still did well.

“We had the home-team advantage, got to sleep in our own beds,” Bentley said after the team’s performance.

This marks the second year for the D-B EXCEL team, which took part in last year’s MATE competition in Seattle.

The results of the Kingsport event, which has four divisions — elementary, middle, high school and college levels — will not be known until after the competition concludes Saturday morning.

“It’s amazing to see all the different people represented,” Bentley said in the staging area outside the Aquatic Center, which had an international flair as teams from across the world came and went Friday afternoon.

Two of the 70 teams that earned a spot in the event were unable to make it to Kingsport. A team from Turkey was detained at John F. Kennedy Airport in New York on national security grounds and asked to disassemble its robot, competition officials said. Some other international teams were detained, but made it through in time. A team from Utah was driving to the competition, but got stuck in a tornado area.

Fadi Sarwat of the Vortex team from Alexandria, Egypt, was eating pizza in his team’s staging tent. He said he feared the group didn’t do very well. However, he said he hopes to attend the international event next year as a member of a college team. The Vortex team is not returning home until Monday in order to have some sightseeing time.

“I like the trees and green,” he said of the region.

Presented by the Eastman Foundation in partnership with STREAMWORKS Powered by Eastman in Education and Visit Kingsport, the underwater robotics event for ROVs (remotely operated vehicles), began Thursday and runs through mid-day Saturday at the Aquatic Center and MeadowView Conference Resort & Convention Center.

Two winners of the  Appalachian Highlands MATE ROV Competition held at the Aquatic Center in late April are taking part this week: the R-Mateys and SEAL Robotics of Greensboro, North Carolina — both in the high school class.