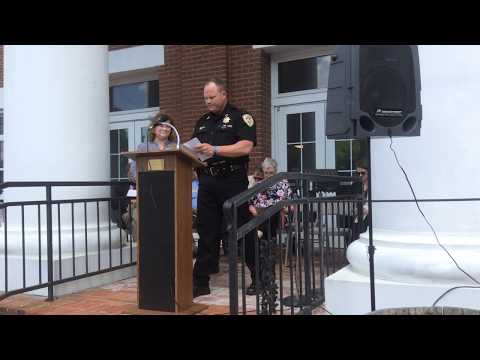 BLOUNTVILLE — A crowd gathered to pray Thursday in front of the historic Sullivan County Courthouse, marking the 2019 National Day of Prayer and honoring its theme.

At the national level, the event has been around since the early 1950s. Each year, a common theme is proclaimed with a goal of bringing groups together in prayer across the nation with that theme in mind. This year’s theme was “Love One Another,” based upon John 13:34. “Love one another. Just as I have loved you.”

Sullivan County’s event featured speakers from five churches, representing two denominations. Welcoming remarks were delivered by Sullivan County Mayor Richard Venable, and the Pledge of Allegiance was led by the Sullivan South ROTC’s Lt. Col. Lindy Williams after a presentation of the colors by ROTC members.

Prayers were offered for love in our nation (John 13:14), love in the state of Tennessee (John 13:15), love in Sullivan County (John 4:7), and love in our communities (I Corinthians 13:6-8). The crowd participated in most through responsive readings.

For the text of the full 2019 National Prayer for America, visit http://www.nationaldayofprayer.org online.

• There have been 146 national calls to prayer, humiliation, fasting and thanksgiving by the president of the United States (1789–2017).

• Every president since 1952 has signed a National Day of Prayer proclamation.

• Records indicate there have been 1,526 state and federal calls for national prayer since 1775 and counting.