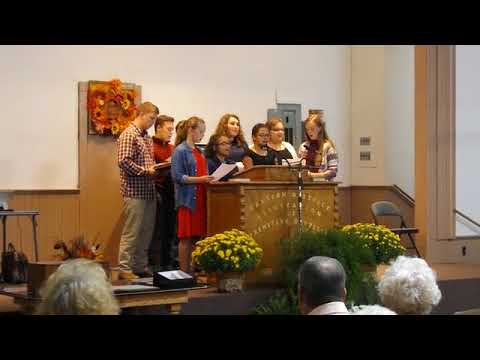 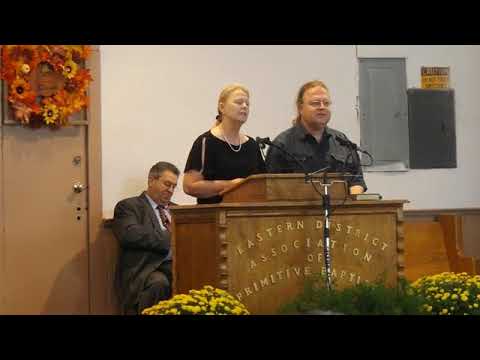 
Destinations and Diversions: The Association, AKA 'the 'So-say-shun'

For generations of my family, and many others in our region, fall brings a major church gathering: “the So-say-shun.”

That’s a colloquialism for “the Association.” I was probably 12 or 13 before I knew that. I just always knew “the So-say-shun” was around the first of October — and that it was a major social event on top of being an important church function.

Since the mid-1800s, the annual meeting of the Eastern District Association of Primitive Baptists has brought together attendees of member churches from throughout Northeast Tennessee, Southwest Virginia and Ohio. Organized after a split from the Mulberry Gap Association of United Baptists (organized 1835) the East District Association held its first annual meeting in 1848 at Blackwater Lick Primitive Baptist Church. Each year, churches throughout the district vie to host the annual meeting. The “So-say-shun” is a four-day event that always begins the Thursday before the first Saturday in October. Over the years, the event has returned to Blackwater Lick multiple times. It did so again this year, for the 165th annual session.

Last year I was able only to take my mother, Wanda Wallen Osborne, for one day. It was at Swan Creek near Sneedville in Hancock County. Mom and I both have Meniere’s disease, an inner-ear problem that can cause episodes of vertigo. We took a long, circuitous route to get to Swan Creek in order to stay on a four-lane highway most of the route. When she learned the “So-say-shun” was going to Blackwater this year, she immediately made me promise to go as many days as possible.

So last month, I took a Friday off and we headed to Blackwater, birthplace and childhood home to both Mom and my father, John H. Osborne Jr. Heightening the interest for me was where the meeting actually took place: the old Blackwater School. Located just across the A.J. Osborne Highway from Blackwater Lick (AKA, “Big Door”) Church, the old school is where both my parents and their siblings attended school. The church now owns the facility, which ceased to be a school by the early 1970s. For a couple of decades or so, it was operated as a sewing factory and provided jobs for many area residents. My father, five years older than Mom, graduated from Blackwater High School in 1947. The ceremony took place in the very room where this year’s worship, singing, and church business was conducted over the four days of the 165th annual session of the Eastern District Association of Primitive Baptists.

During lunch break both days, I had Mom show me around the school, which still has some of the classrooms — complete with original built-in cupboards and cloak rooms — intact. She showed me the door from which she — as one of the youngest and the shortest of the younger girls — lead off a procession of “flower girls” preceding that year’s graduates, including Dad.

“I was carrying a fresh bouquet of wildflowers and the girls behind me had a garland of fresh flowers and greenery roped over their shoulders. We came out this door and others came out the door over there on the other side (at the back of the auditorium) and we met in the center and led the procession up the aisle to the stage.”

Did she notice my Dad? “Oh, yes,” said said. “But not in my wildest dreams did I ever think some day we’d date. ... And I am sure it didn’t enter my head I’d marry John H. Osborne Jr. some day. But we did. And we were blessed with a long, happy marriage.”

Mom dug through her old photographs and found a picture of the school building (constructed in the 1920) in 1941, taken from the vantage point of the church — which was hosting the ‘So-say-shun.”

Back in those days, church members recalled during this year’s meeting, it students were allowed to leave school and attend church meetings and revivals — and many answered the call and were saved.

Mom can’t remember how often she got to attend the “So-say-shun” when she was growing up. That depended on how far away it was.

Some church history I learned: Blackwater Lick (”Big Door”) Primitive Baptist Church is one of the oldest churches in the association and in Lee County, having been organized Sept. 27, 1847 (west of its present location near what was then a salt works — thus the “Lick” moniker). Its first home was an old still house. Later a log building was constructed nearby. Toward the end of the Civil War, a group of Union soldiers passed through Blackwater and encamped at the church. The next morning their were only ashes where the log church had stood. It was not known whether the fire was intentional or caused accidentally by use of a fireplace to cook food. After the war, a large log church was built at the present site, the land deeded to the Primitive Baptists by pastor Isaac Robinette. Folks started calling it “Big Door” because, well, it had a really big front door. In 1906, a new, two-story church was built. In 1960, it, too, was replaced by a newer structure. As Big Lick prepared to host the 150th annual meeting of the association, the church bought the old school.

Oh, the last time I’d been in the school was in the late 1960s or very early 1970s. Mom and Dad took us children over to Flower Gap to visit our paternal grandfather Null Wallen and step-grandmother Mary — and we went to an “ice cream social” that night at the school that included an old-fashioned cake walk. I participated — and won a beautiful, mouthwatering triple-layer cake with extra-fluffy frosting. None of us could wait to cut it. So even though it was relatively late when we were dropping Popie and Mary back off at the farm, we went in and gathered in their small dining room and passed around plates. An adult cut the cake and served the first slice — which revealed a long, long, grey hair. We all put our plates back in the stack. All except Dad. He told us we were being silly and some poor matron had worked hard on that cake and we were lucky the hair was in the first piece and out of the way now. He cut another piece and said it was wonderful. We took his word for it.

While worship — through preaching, prayer and song — prevailed as the main focus of the “So-say-shun” during our two days in attendance, another soul-enriching element was ever-present: fellowship.

Mom’s not sure she’ll make it to the “So-say-shun” next year. It’s going to Spring Valley, Ohio (co-hosted by Clear Springs, Fairview, Macedonia, and Rose Chapel on the grounds at Clear Springs). Turns out I learned something else: Mom and Dad never made the trip to Ohio. So, I’m thinking maybe she should go. Mark the calendar if you want to go, too: October 4-7, 2018.

P.S. If you’re doing the math and wondering why this was only the 165th if the first one was in 1848, it’s because the annual meeting did not happen for four years during the Civil War.